Jumping off back of chicken bus #2 at 9:45 am, 3000m above sea level and it’s -really- hot. Probably because I’ve been traveling since 3:45 a.m with fleece pants and a thermal top on, but also because it’s already 30 degrees and I’ve been sandwiched against a rickety bus window and two other locals on a seat that’s meant for 1.5-2 people, max. Thankfully directly above me is an electrical-taped secured speaker that’s been blasting Spanish music all morning. Mm, culture!

Now here’s the thing about all these “I’s”, “my’s” and “me’s”, there’s actually 9 of us doing this trek: 2 guides, 1 solo backpacker and 6 of us are DUNDUNDUN, family. I originally wanted to keep this post about my experience, but it’s hard to do when my experience intertwined with, and was affected by, those around me.

By the time we started off, most of us were at each other’s throats. We had only been in Guatemala for 4 days together, and it was abundantly clear that our ill-fated predictions about family travel had unfortunately become a frustrating reality.

Traveling with family you tend to abandon that filter you usually apply to most relationships that aren’t quite as familiar in your life which, for us, led to a lot of the exact attitude I had hoped our big personalities could avoid. Wishful thinking.

To cope with the negativity, I strayed behind, content in silence, daydreaming of the poetic words of John Muir, Rick Bass and other devotees of the wilderness. Their recounts of nature are so playful and yet resound a rich wisdom about soaking in the wild until it settles in your bones and becomes what I can only describe as the essence of being human; the mingling between brain and body that merges being cognizant and analytical of into the quietness of feeling a place. In the wilderness the head submits to the heart. At least this is true of mine.

The first part of the ascent was rough cobblestone that gave way to (or more likely, was given up on) a dirt road, occasionally occupied by farmers and their pickup trucks hauling various crop or half a dozen locals. The tied-up sheep could be heard wailing in the blazing sun and the children working in their family fields called out, “Quetzales! Quetzales!”*, as we walked by, making me feel more like a tourist than the adventurer I set out to be.

The dirt is loose and poofs out around you, unlike any dirt I’ve set foot on, which was as interesting as it became annoying to our clogged eyes, nostrils and lungs. By the time the wide dirt road dwindled to a single-file path, the sun was high, hot and a few of the group were already drained from the altitude, pack weight and inexperience. Tajumulco’s peak loomed in the distance, frequently masked by the high clouds. Seeing the summit made me excited and hungry for that feeling of being as equally conquered by the treks difficulties as rewarded by conquering its difficulties; to some of the others, I imagine it seemed increasingly intangible and more like one of those nightmares you keep waking yourself up from just to fall right back into.

By lunch break most of us were exhausted by one thing or another and with all of us a little sunburnt we welcomed resting in the shade of the surrounding pines as we ravaged vegetable sandwiches in the high altitudes cold breeze. Here I took the opportunity to scout out an ample-sized boulder covered in soft moss and with the aid of my pocket sketchpad and pencils, I documented the view. It was also here that, sitting between two tall pines, I recalled the John Muir quote I had been carrying in my pocket:

“Between every two pines, is a doorway to a new world.” 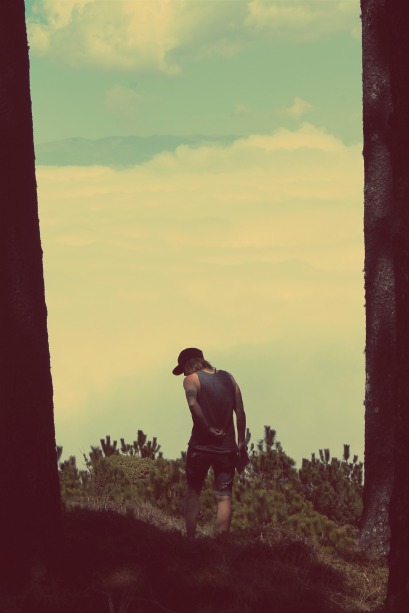 Thick clouds rolled in as we slung our packs onto our backs, and as the visibility rapidly declined, we were told to stick together and take it slow until conditions were better. We also learned that we were already taking it slow, much slower than most groups do. But with two women above 50 and the first signs of altitude sickness appearing in a few, we had no choice but to succumb to slowness.
(p.s. I highly recommend altitude pills; get a prescription containing more pills than required. 45ish pills typically cost around 10$ CAD, and after witnessing the wrath of altitude on dozens of backpackers in Peru, they are an inexpensive and imperative tool for a successful summit.)

5 hours later, 4000m up, we finally reached basecamp but there was no time to lollygag, we were losing daylight fast and we still needed firewood, shelter and a meal before slipping into an exhaustion induced coma.

The allure of a beautiful place combined with a lack of regulation, comes the detriment of its resources. Amongst the sea of toilet paper and human waste, the ground was also littered with broken glass and garbage. We were told the trash was primarily from locals who come up here to pray, which after witnessing Guatemalans throwing their garbage out bus windows and spotting all the streams/ditches loaded with trash bags and the occasional dead dog, it wasn’t surprising news. The stunted, meager selection of coniferous trees paired with the dozens of groups huddled beneath their scorched and hacked trunks, left the task of scavaging to be desired.  However, after an hour or two we found ourselves gathered around the kindled flame and as stillness washed over us the immensely challenging day gave way to laughter and let our weary bodies revel in accomplishment.

With a full belly of pasta carbs, I crawled between 3 others in the tent and let my last conscious thought be how comforting the earth’s hardness beneath my body felt. Before I knew it, the 3:30 a.m alarm sounded and we were packing our sleeping bags for the final hour of incline hiking. It is happening! We’ve made it! My heart is racing wildly for that summit, my hands are fumbling for that tent zipper, I thrust my face through the opening preparing to launch my body into the last stretch of climb when… they hit me, all at once…

That overwhelming feeling of viewing something so
god
damn
pristine
that it punches you in the solar plexus and leaves you gasping for breath. With my eyes trying to open a little wider and my brain spinning from the grandeur of it all, that hunger for the summit is replaced by the billions of burning white dots that instantly foster the humbling paradox of feeling home.

And then we’re off!

Our headlamps lighting the immediate boulders and loose rocks in front of us that our hands and feet scramble to conquer, the steepness requiring an exertion from our lungs that’s immediately seized by the frigid, thin air. Climb, rest, sweat, repeat for 45 minutes until my feet finally connect with the flat surface of Tajumulco’s summit. I let out a call to the wild as if to say YOU BASTARD, I LOVE YOU!

I sit against one of the lonely boulders at the top of this volcano, the wind is fierce and unrelenting and as I wait for the sun to deliver heat I reflect on what a human needs for that sense of accomplishment we all seek in life. I know happy people who have never traveled further than 3 hours from their home; I know people whom the only hunger for more lies in a work promotion; I know others who are completely content at 55 knowing their children are independent and -good- people.

And here she comes, the first of her sunbeams cutting the horizon with light, unveiling 360° of earth, swaddled in the most celestial clouds interrupted only by the very tops of smaller neighboring mountains. Pastel blues, pinks and purples paint the opposite horizon and as brilliant yellows and oranges dance around the sun, my sense of accomplishment rises with the new day. I find my awe in limiting my life to a backpack and walking places I’ve never been. That kind of simplicity instills a joy I will relish in for as long as my body is able to carry me. 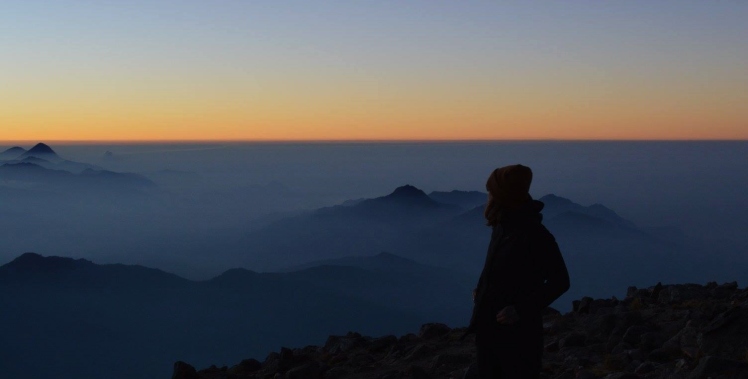 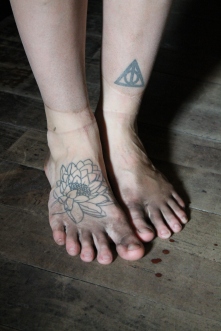 *Quetzales is money, and after a week of pronouncing it Kwet-zels (like pretzels), the one of twoSpanishh words I caught onto,  taught me it’s more like: kyayt-zal-es. 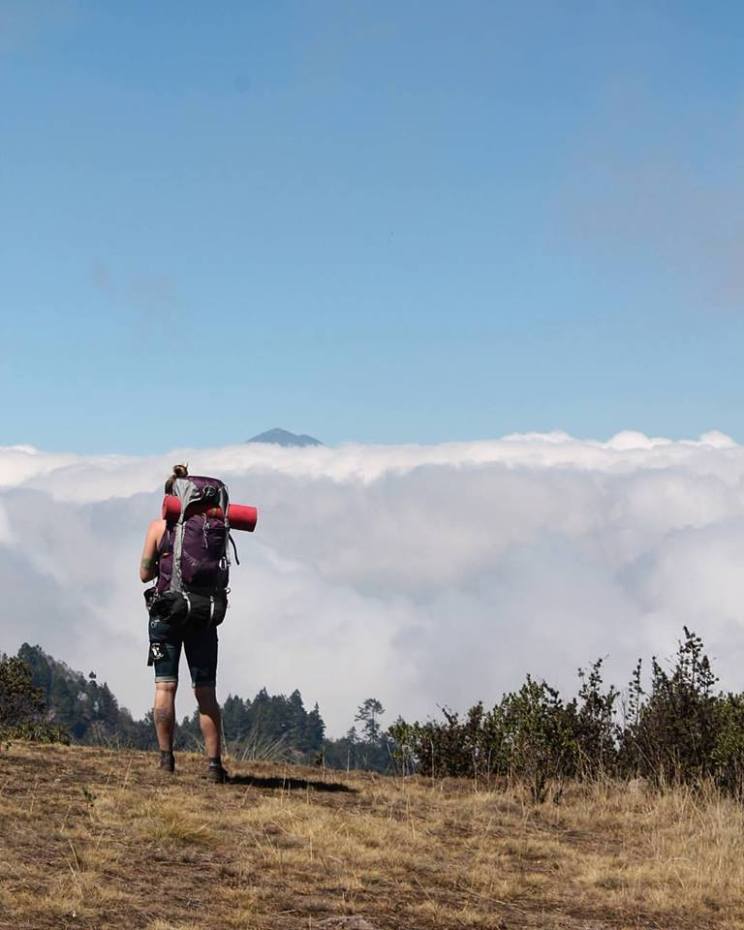